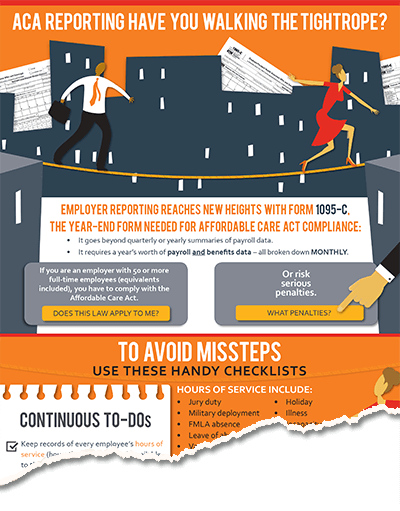 Integrity Data has been on top of the intricacies of the Affordable Care Act reporting regulations since they were first published back in February of 2014. Our proprietary software, designed to handle the ins and outs of compliance, had been developed and in beta testing for more than a year before that. Our first business customer implementation was a mere two weeks after the regulations were published.

When ACA regulations (commonly referred to as pay-or-play because of the stiff financial penalties attached to non-compliance) were published, it was assumed that employers would immediately investigate how to update their approach and reporting in order to comply. With so much change and attention to detail required, they would need time to adjust.

Initially it was intended that reporting should start from January 2014. Thankfully, that goal was realized to be out of reach for many employers. For a variety of reasons, the IRS decided to delay the beginning of the penalty assessment period to January 2015. This was the first of two grace periods. Whew, breathing space!

But what was the intention behind granting first one and then a second grace period for ACA compliance?

At the time the first postponement was granted in July of 2013, the IRS stated that the extended period was to enable employers, insurers and other providers to adapt both their coverage and their reporting systems. The rationale for the second postponement echoed the first. Businesses were to be allowed additional time to prepare for compliance. This should have given employers and others a good two years to get up and running before compliance became mandatory.

What happened? Because the ACA was such a politically charged issue from the start, and because opponents never stopped calling for its repeal, business owners could almost be excused for their wait and see attitude toward compliance. They started to wonder if they really would have to make all those changes after all.

And here they are in 2016, unprepared for what is now mandatory and facing heavy fines for each year that they remain behind.

According to a report filed in January of this year, and based on a study conducted by the ADP Research Institute on behalf of the leading payroll service provider, a significant number of employers are way behind in ACA reporting readiness.

18% of companies with 50-999 employees and 32% of companies with over 1,000 employees said they planned to file for an extension to the deadline. Given that the IRS granted the 60-day deadline extension for 1095-C production across the board, filing for additional time to produce 1095-C forms is not a realistic option for any U.S. employer. The IRS believes that with the prior extension, employers should have had ample time to prepare for compliance.

So, as it stands now, a large number of employers have not made the necessary changes and will certainly be penalized for not keeping up. Now it’s time to scramble.

Integrity Data’s ACA Compliance Solution, a tracking and reporting engine in commercial use since February 2014, can help in this fire drill.

Our ACA Compliance Solution is designed for businesses with anywhere from 51 employees to over 60,000 employees. It is backed by thoroughly knowledgeable support and development teams and has been debugged for numerous reporting scenarios. Implementation can be done in a matter of hours using data collected from any payroll or ERP system.

2016 is the reporting year for which you will need to be audit-ready. No more excuses or good faith promises will be accepted by the IRS. You will indeed have to play or pay, and the penalties can be painful.

Integrity Data’s ACA reporting service can also help in case of an audit. The ACA concepts, classifications and calculations coded into our logic make for comprehensive tracking and reporting features that will answer the question that is likely to be the starting point of an audit: “How did you make the determination of full-time employees?”

We know ACA risk management. We know how to keep employers updated.

Want to dig deeper? Join us this Summer for our ACA 201 Educational Webinar Series.