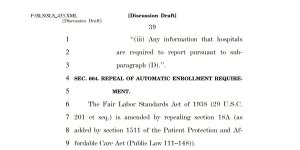 Click on the image to read a tucked-away Affordable Care Act concession in the October 26, 2015 agreement that the White House reached with congressional leaders over budget reconciliation.

October 27, 2015 – A much-contested provision in the employer mandate of the Affordable Care Act appears close to repeal after the budget agreement that the Obama administration reached with congressional leaders just before midnight.

It is the provision that requires employers with over 200 full-time employees to automatically enroll employees in coverage within their first 90 days (to be precise, before the first day after the first full three months of employment).

The undoing of ACA automatic enrollment provision – should Congress pass the two-year budget deal that raises the federal borrowing limit and infuses $80 billion into defense and domestic spending – is a concession listed as Section 604.

Titled “Repeal of Automatic Enrollment Requirement,” this concession would eliminate the ACA regulation amending the Fair Labor Standards Act of 1938, which says that “an employer to which this Act applies that has more than 200 full-time employees and that offers employees enrollment in 1 or more health benefits plans shall automatically enroll new full-time employees in one of the plans offered (subject to any waiting period authorized by law) and to continue the enrollment of current employees in a health benefits plan offered through the emplo